The hard copies of my book, The Linux Philosophy for SysAdmins, are now available at Apress and on-line at Barnes & Noble but not yet at Amazon. Amazon is showing availability in February of 2019 but I think it will actually be available sooner.

This is all quite exciting for me as an author. I wrote a couple chapters for a book on OS/2 many years ago, and I have written for various publications such as Linux Journal, Linux Magazine, and Opensource.com but having my own book published is amazing.

I am looking forward to your feedback. I hope you will purchase my book, if you haven’t already, and leave a review on Amazon, Barnes & Noble, or Goodreads. If you may email me directly at LinuxGeek46@both.org with direct feedback such as errors and typos. If I do not respond, it may be because my server has blocked your email for some reason so contact me on Twitter @LinuxGeek46 and let me know of the problem so I can whitelist you.

My book, The Linux Philosophy for SysAdmins, is now available for purchase in epub formats on line at Apress and Amazon. The print version is coming soon.

After my post, KDE Komplications, I have noticed some definite improvements in the KDE applications I like to use. I like to use Gwenview image viewer, Krusader file manager, and Konsole terminal emulator. These had all been having problems until I recently installed a new set of updates for Fedora 28. I do not know if this has resolved all of the problems with the KDE desktop but it has definitely resolved all of the problems I was having with those applications. Gwenview no longer crashes and all of the apps now display the correct icons where they showed no icons while the problem existed.

For the time being I intend to continue using the Xfce desktop and the xfce4-terminal because they are fine applications in themselves and give me the features I need and most that I like.

I will probably continue to switch between file managers as I have a different favorite for many of the tasks I do. I like Krusader when I need lots of directories open using both tabs and twin panels. I like XFE because it has a great sidebar that shows the directory tree and makes navigation to distant places easy. I also like the text-based Midnight Commander (mc) for use in terminal sessions. I find Thunar especially good for browsing with thumbnails to locate specific images or documents and it has a good sidebar.

At some point soon I will try the KDE desktop again and see if it still crashes and causes long, resource-eating core dumps. 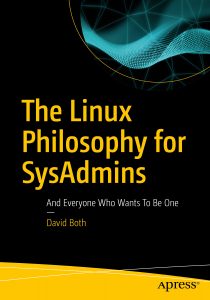 The Linux Philosophy for SysAdmins

“The Linux Philosophy for SysAdmins” is the book I wish I had when I was starting life as a SysAdmin and before I found my mentors.

For more information and a link to a complete book description, see the post on my personal web site.

My new book, “The Linux Philosophy for SysAdmins” has been sent to production. The next step for me is reading the proofs to verify that everything has been translated onto the page as I intended. I am especially interested to see how some of my illustrations turn out.

Stay tuned!  I will have availability dates as soon as possible.

I have very much enjoyed using KDE for most of the last twenty or so years that I have been using Linux. Not to mention many of the KDE applications that I find useful. However, over the years, KDE has become massive, komplicated, and monolithic; it is fat and the pieces are so interconnected and interdependent such that it can no longer be properly managed.

I really like many of the KDE features and applications, but KDE insists on having not just one or two but several daemons running underneath the slick desktop in order to accomplish many tasks that I find useless. These daemons do everything from keeping track of files and directories to managing core dumps. KDE itself has become unstable so that core dumps are a common occurrence.

All of this results in a Linux experience that is slow most of the time, and positively glacial at worst.

I have been using other desktops for months, now and am finding the experience much better, However some of the KDE applications I still like have infected my otherwise decent LXDE desktop with remnants of their crapware. For example, Gwenview, a KDE application, is great and it meets all of my needs in an image viewer. However it seems to crash frequently these days and those crashes result in kactivitymanagerd generating many core dump files in /var/lib/systemd/coredump. This takes huge amounts of disk bandwidth and slows down the entire system. More than once it has also resulted in filling the /var filesystem with core dumps which brings the entire system to its knees.

Just to be clear, these problems occur on multiple computers and whether the system was upgraded or installed to bare metal. I have even seen them occur on virtual machines. Google searches indicate that I am not the only one experiencing these problems. Of course this is in addition to the regular five-year release of KDE that is almost completely broken and unusable.

So I am saying goodbye to KDE for the foreseeable future. I will be using LXDE which meets my needs and is also much slimmer and faster than KDE. I also intend to try other desktops from time to time in case they might also meet my needs, but for now I will use LXDE and remove all vestiges of KDE from all of my systems.

I recently purchased a new ASUS TUF X299 motherboard and an Intel i9 processor with 16 cores (32 CPUs / threads). The processor runs at a default of 2.8 GHz but is actually capable of being overclocked to much higher speeds on this Fedora 27 box.

I really don’t care about getting the last bit of performance out of my computer; I really would rather have reliability than maximum speed. But I do want a bit more than 2.8GHz.

After fussing with the system for a few days and not getting any stable results, I decided that it would be interesting to try reinstalling fedora from scratch. For the last several versions I have been doing upgrades rather than reinstalls, so I thought I might as well try the reinstall. That did work for me and I was able to get to my target of 50% overclocking without any trouble.

You should note that the Fedora Project recommends not overclocking your CPU.   https://fedoraproject.org/wiki/HardwareProblems

The bottom line in this case is that Fedora should be installed from scratch on a host in order to ensure best performance from these newer and very powerful CPUs.

Check my personal web site www.both.org for an update on the progress of my book, “The Linux Philosophy for System Administrators.”

At the end of October, I signed a contract for a book deal with Apress publishing. My book is tentatively titled, “The Linux Philosophy for System Administrators.” My intention is for it to be the book that I wish I had when I started as a System Administrator (SysAdmin) many years ago.

Apress specializes in books for IT professionals, developers, and technical communities around the world. I am pleased to be associated with them in this effort.

I will post more information over the coming weeks and months in order to let you know more about the book itself and to keep you abreast of our progress. I do not currently have a publication date but I think it will be sometime in the second half of 2018.

I have made a significant change in the look of the Linux DataBook web site. I found This new “Magazine-Basic” theme on the free WordPress themes site. After making a few simple configuration changes to the theme, installing my Linux header image, and a couple other minor changes, it is ready for use.

This new theme is clean, easy to read, and easy for me to work with as the admin and sole author. I like its simplicity, and it also handles code segments better than my previous theme so that they are easier to read and don’t run off the right edge.

Today I downloaded it and upgraded one of my VMs from Fedora 25 to Fedora 27. That went very well, so I upgraded my main workstation. That went well, too and I am using that workstation to write this post.

It took about 3 hours to do the upgrade using the dnf upgrade plugin. I have written a script that does all the work so I just run that and check up on it later. This upgrade procedure has worked well for the last four  version upgrades.

I have only played – er experimented – with F27 for a few minutes but I will try to write a bit more about it soon.,

I am attending All Things Open 2017 in downtown Raleigh today and tomorrow, Oct. 23 and 24. If you are interested in hearing from some of the brightest minds on the planet about how Open Source Software and processes can work for you, this is the place to be.

There is no reason for any individual to have a computer in their home.