Up one level: Section: The Basics
Previous: Anatomy of a Window
Next: 1. Kool Desktop Environment

This Chapter covers the basic tasks and skills you will need to navigate the Linux KDE Desktop Environment, which is one of the two most popular Graphical User Interfaces (GUI) for Linux. It covers the basic components of the GUI such as the desktop, icons, the components of windows and how to manipulate them and make them do what you want.

I cover KDE Versions up through KDE 3.5 in this Chapter. KDE 4.0, which was first released in Fedora 9, is significantly different, so I will be devoting a separate chapter to it – when it becomes stable as the 4.0 version is not. So any generic references to KDE in this book and specifically in this chapter refer to KDE 3.5.

This chapter covers KDE as the GUI for your Linux computer, but another common and popular GUI, GNOME is also available. Still other GUIs exist for Linux, but these are the two most powerful, feature-rich and the most configurable of all of the ones available, as well as being more appropriate for most users who are not Linux gurus. I have chosen to concentrate on KDE because it is very popular, and because it is the Desktop Environment that I prefer. It works the way I like to work more so than other GUI desktops. It is more flexible and has more configuration options than any of the other desktops that I have used including GNOME. This also makes it more complex to configure because there are so many choices.

Regardless of which Desktop you use, the basic functions and methods for manipulating windows and icons are the same, or at least similar enough that you should have no trouble should you ever need or want to switch between them.

Many programs have been written for KDE and many have also been written for GNOME. Although there may be a few programs written for a specific Desktop Environment that will not run on another, virtually all of the programs that I have tried will run on both KDE and GNOME, and vice-versa, so long as the appropriate libraries (supporting programs) for the other Desktop Environment are installed. Of course, if you do run into that one program that you must have that does not run on KDE, you can always switch to GNOME temporarily. With the release of Fedora Core 5 and later releases, you can have KDE and GNOME running simultaneously and switch between them.

What is a GUI?

A GUI is a Graphical User Interface. “So what?” you ask.

The main idea behind a GUI is to make the computer easier for most people to use. It is easier to understand a graphical interface than the old DOS prompt or a Linux shell session, neither of which give you any cues as to what to do next. A GUI provides a graphical environment in which the desktop can give you cues and help you with performing your work.

When you interact with Linux through the GUI, you may use one of several desktop environments the two most popular of which are the GNU Network Object Model Environment (GNOME) and the K Desktop Environment (KDE). The desktop is not really the GUI, but rather the GUI makes it possible to run a graphical desktop that can display icons, windows, and popup menus.

You will hear more advanced users talk about the shell, and there are some rare instances in this book that show you how to perform a few tasks with a shell, otherwise known as the Command Line Interface (CLI). 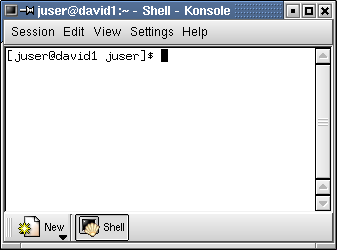 Figure 1: A shell prompt or session.

Just what is this thing called a shell? A shell, like the GUI, is another interface to allow you to interact with the operating system and computer. Unlike the GUI however, the shell is – according to some – relatively primitive as an interface and not very user friendly. The shell session shown in Figure 1, for example does not provide any clues about how to proceed; it merely sits there with the $ command prompt waiting for you to type a command.

You can interact with the computer through the command prompt by typing commands, but you must be familiar with the commands and options available for each command in order to do so effectively.

There are many tasks which can be accomplished far more easily with a shell command than through the GUI. Many advanced Linux users even prefer the shell interface over the GUI. I personally like the shell very much because there are many things I can do with a shell which cannot be done at all with any GUI. Many advanced users are equally comfortable using either interface. This book pretty much ignores the shell because using a shell effectively requires learning a large number of commands and that is not the objective of this book.

If you have never seen a shell session before, don’t worry, I am not going to teach you how to use them now. I just want you to know what you are missing. You can determine whether that is good or bad.

Up one level: Section: The Basics
Previous: Anatomy of a Window
Next: 1. Kool Desktop Environment

Any given program, when running, is obsolete.