Up one level: Section: The Basics
Previous: When You Are Finished Using the Computer
Next: Using Multiple Desktops

Most modern operating systems (OS) have a Graphical User Interface (GUI) that provides end users with a relatively familiar desktop paradigm on which to work. Regardless of which operating system you use, whether Windows, Solaris, Linux, or any other, the mainstream versions intended for general use all provide a GUI which use a desktop metaphor.

In modern multitasking operating systems the GUI provides easy access to multiple programs, applications, desktop applets, and navigation tools. All of these can be simultaneously running and available even though we humans are limited to interacting with only a single program window at a time.

My desktop is more or less typical. I have a large LCD screen display with lots of real estate so I usually have several programs open simultaneously.This allows me to switch between running applications quickly and is one of the advantages and hallmarks of a multitasking operating system. 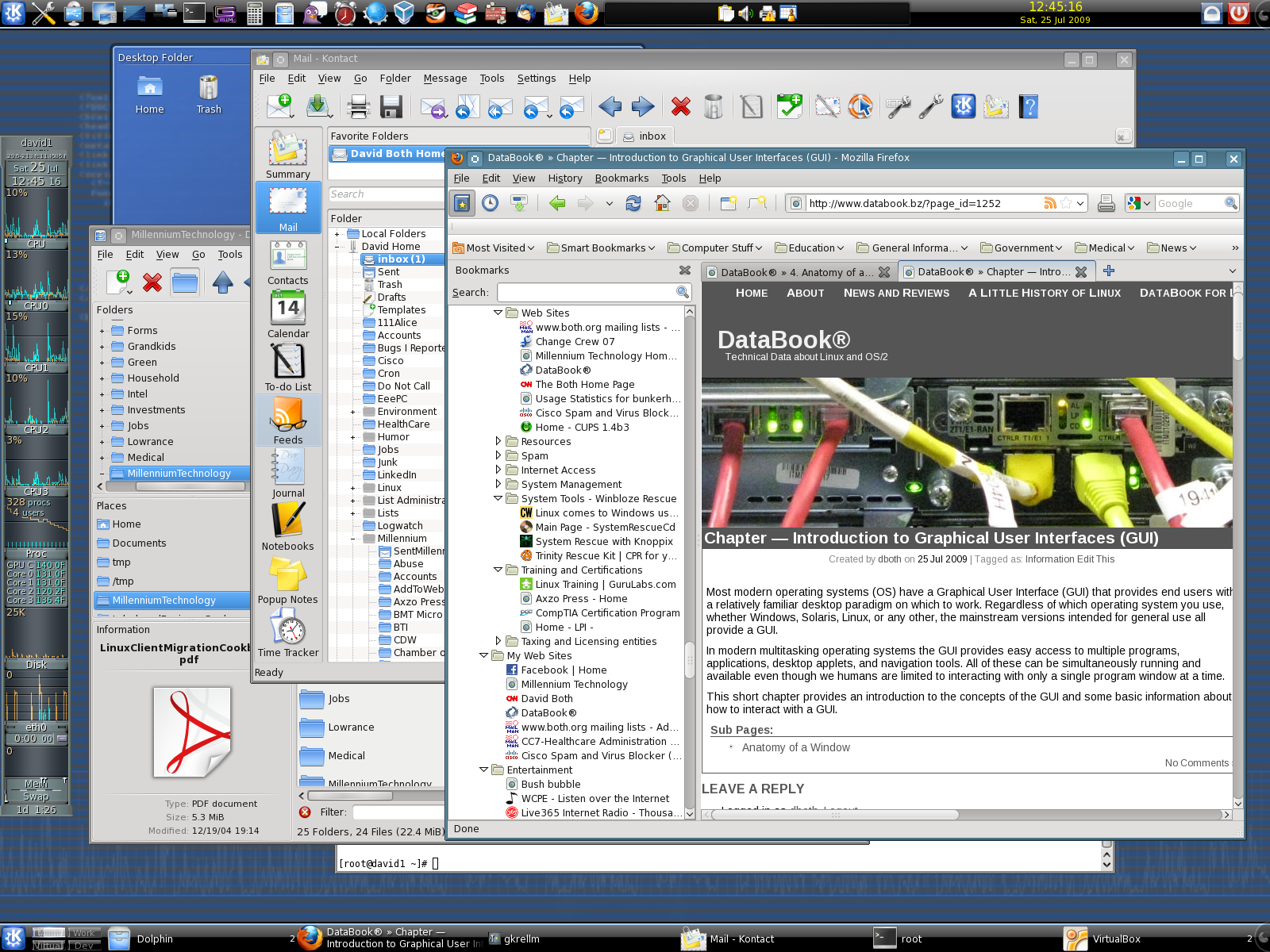 As you can see in Figure 1, I have two KDE Panels, one at the top for launchers and the System Tray, and one at the bottom which is primarily for the Desktop Pager, which shows that I have four different desktops, and a Task Bar which shows my running applications and other open objects such as the Dolphin File Manager. There are six windows open on this desktop and two open on another desktop. I can switch between them easily by placing the mouse pointer over the one I want and clicking to raise it to the foreground. I can also click on the window I want to interact with by clicking on its icon in the Task Bar. Either way is fine and each way does exactly the same thing — bring the desired program window to the foreground so you can interact with it whether it is on the current desktop or a different one.

This short chapter provides an introduction to the concepts of the GUI and some basic information about how to interact with a GUI. Some of the illustrations in this chapter, indeed in this entire DataBook® are from current Linux distributions such as Fedora 11 and Kubuntu 9.04, while others are from earlier distributions. You can see the great similarities between the primary distributions of Linux, Fedora and Ubuntu, Kubuntu specifically, and current vs earlier versions of Linux, particularly Fedora from about release 6 through 11. Thus you can see that the similarities in how things work are very great even though the decorations and color schemes may vary quite widely.

We also discuss KDE 3.5 and KDE 4.2, each with a complete chapter. Despite the fact that KDE 4.2 is the most recent and advanced of the two, KDE 3.5 is still in wide use throughout the world in various Linux distributions. And despite the differences between KDE 3.5 and KDE 4.2, there are plenty of similarities. After all the desktop metaphor is the basis for any GUI desktop and so certain things will probably remain the same until a new metaphor comes into use.

Up one level: Section: The Basics
Previous: When You Are Finished Using the Computer
Next: Using Multiple Desktops